Meeting the Pommery Australia Ambassador at a recent Champagne tasting, I discovered a few things and a few misconceptions. I had thought that Madame Pommery and Louise Pommery were one in the same.  As it turns out, Louise was the daughter of Madame Pommery – Jeanne Alexandrine Louise Mélin, who was born in March 18, 1819 in Ardennes and married Alexandre Pommery in 1839.

It was upon Alexandre’s death in 1858, that Madame Pommery, assumed full control of the business. One of her first decisions was to sell off the struggling wool business, and concentrate on the Champagne wine business.

With those words, the young widow set out in 1858 to conquer national and international markets –overturning, without any qualms whatsoever, one or two corporate management rules. She was a true trailblazer, laying down the basis for any luxury product promotion; style, brand, communication and public relations on the estates. She invented the image of the Pommery brand.

She purchased 120 limestone and chalk pits, so-called crayères, carved underneath the city of Reims by Roman soldiers during their occupation of Gaul. When years later she opened up ‘what was the biggest building site of the century in Reims’ and the metamorphosis of the chalk-pits into caves. 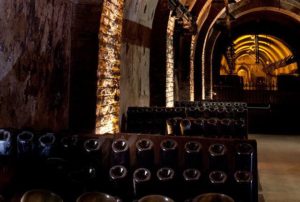 These unique cellars allowed her to store and age thousands of bottles in a temperature-controlled environment (a constant 10°C). Many other Champagne houses would later follow suit.

As much as I love champagne, I also love reading and hearing about the entrepreneurial spirit of the people of Champagne, and especially the fabulous women of Champagne. As you can imagine, at the time it was very unusual for a woman to be the head of a business, let alone one to create these amazing success stories. Madame Pommery was another one of the great Veuves (French for widow), to be risk takers, leaders and excel in their field.

Long before we heard about corporate responsibility, Madame Pommery also put her fortune to “good use”.  A businesswoman she certainly was, but also a compassionate woman; she set up the first “pension fund” and “social security” for her workforce, and it was to her that the town of Reims owed its orphanage and nursery fund. That was how she invented the company’s ethical charter.  She supported artists, especially those of her town. She bequeathed artefacts to the Reims Museum as well as the donation of Millet’s The Gleaners to the French state. Madame Pommery felt that “… everything you can reap from working is a saintly thing” – inventing, long before it became the fashion, corporate sponsorship.

Her entrepreneurial journey was surely not planned, but began when of fragile health and with a fortune made in wool, Monsieur Pommery decided to retire in 1856 so that he could enjoy a calm life. With their son Louis grown up, the couple did not have any goals other than a well deserved holiday.  That’s when, unexpectedly at the age of 38, Madame Pommery became pregnant.  This happy miracle more than 17 years after their first child was going to change the course of their lives forever.  To ensure the financial security of his family, Monsieur Pommery decided to start work again. While the wool industry was declining, the champagne business was expanding. However when Monsieur Pommery died in 1858, their daughter Louise had not even had her first birthday.

She was not only a widow, but a single mum with a son and a young baby. Through this, Madame Pommery gathered the strength to create this beautiful champagne story. 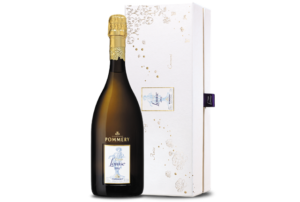 Today, the Pommery brand states that it is with pride, passion and emotion that they try to reproduce Madame Pommery’s miracle – the birth of their daughter, under the sweet name of Louise. This is the Pommery cuvee de Prestige, the Cuvée Louise.

“I wanted this Estate to be like an open book, facing the world and time. Leave your imprint on it, as I have left mine, for posterity.

And let it be worthy of respect, I have wanted these walls to express each day for this Champagne, a wine that has now become a shared part of our souls and that carries the memory of our art forever.”

It was ten years later, in July 1868, that Madame Pommery opened up “what was the biggest building site of the century in Reims”. Belgian and French miners dug out eighteen kilometres of interconnected rib or barrel vault galleries to create the cellars – a vast and entire underground town. With its squares formed by the old walls, Gustave Navlet was commissioned to sculpt huge bas reliefs as a celebration to wine. They still accentuate the beauty of the galleries. One monumental 116-step staircase connects this underground world to the outside world.

Madame Pommery instituted a tradition of giving the cellar galleries the names of great foreign cities as they conquered them commercially. 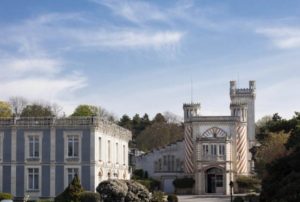 Above ground, the vast estate that was created is said to be in English gothic style in tribute to the market that favoured the Pommery brand that led to their success.

As she continued to evolve the business, Madame Pommery saw an opportunity when she instructed her Cellarmaster to create a new style of champagne. This would become invention of Brut champagne in 1874.

“Damas, what we need is a wine that is as dry as possible but is not harsh … has to be mellow, velvety and well blended … make sure that it is subtle more than anything else.”

This was a bold request, as at the time the prevailing taste was for very sweet champagne (up to 300gms of sugar per litre, compared with now up to 12 gms per litre), which was favoured by the Russian market.  This brut champagne was eventually created by Damas’s successor, Victor Lambert.  The first brut in the history of champagne was the Pommery Nature 1874. It was a revolution. You can imagine it would have been quite a shock to the palate.  When I did a search for the meaning of the word ‘Brut’, I discovered that it comes from the word Brutal, which a low/no dosage champagne must have seemed to the sweet palate of the time.

It did, however, prove to be a winner. The English market in particular preferred this dry style. Pommery was very popular with the English establishment. A book on the Champagne trade written about thirty years later, records that the 1874 vintage brut fetched the highest prices ever paid in London for Champagne.

One example I read about Madame Pommery’s ingenuity with her PR, was the story of when in the Autumn of 1888 there were nasty rumours being spread about Pommery. To achieve the maturity required to produce her Brut, once again they had delayed the grape harvest, whilst still having to make substantial commitments to the wine growers. Her competitors stirred up worries about her ability to make payments.  Ever the fighter, she launched a “media offensive” that put an end to the rumours. Hearing that the painting The Gleaners, depicting peasant life in rural France, by French artist Millet, was being sold at auction, and that there was interest in America to acquire the painting, she set about her campaign. The French public were not happy about these paintings being sold off abroad, as had previously occurred with works by Millet.  The order was put out to acquire the picture at any cost, and it sold for 300,000 gold francs to an anonymous buyer. Under great suspense, it was not until four days later it was announced that Madame Pommery had indeed been the buyer, and that she would donate it to the state of France. The painting was originally gifted to the Louvre, and today it is included in the works of art at the Musée Dorsay.

After Madame Pommery died in 1890, her daughter Louise ran the House with husband Prince Guy de Polignac. The Polignac family continued to run the business until 1979.  The brand continues the ethos of the Pommery family traditions today. The connection with art continues through support for artists and exhibitions both local and worldwide, and also many fun, contemporary branding through the Pommery POP collections.

Today, the Pommery Estate is owned by Belgian entrepreneur Paul-Francois Vranken and holds more than 20 million bottles in the 18km of underground chalkpit caves. More than 120,000 people from around the globe visit this magnificent property in the heart of the city of Reims annually and equally enjoy the exhibition of contemporary art set up in the caves.

As I often say, I think that Champagne is one of the joys of life, and

Now that is something to be celebrated.

We would like to acknowledge the assistance of Pommery Australia in providing information (and this months giveaway) to create this story.

Would you like to join us in Champagne? As part of our Events and Tours program, we will offering a small group tour, with visits to some of the great champagne marques like the Pommery Estate, our program includes exclusive champagne-matched lunches and dinners, and private tastings.  Spaces are limited.  If you would like to register your interest to join us, you can do so here Register your interest to join us in Champagne.

Like to keep following us? Sign up to The Bubbles Review list and you will be included in our monthly Subscriber prize draw. The monthly giveaway is usually a chance to win a lovely champagne or sparkling gift. This month was a gift boxed bottle of Pommery Brut Royal.  Join our list!

A Blanc de Blanc with a twist! 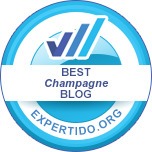